“I’m sitting there in the bank just crying, just reading through all of the things. Oh, look, she paid for the dogs to go to the vet. Oh, look, she bought this. So many times when we would go out to dinner — and I would pay for dinner — she would pay with what I thought was my card, coming out of my account. No. She was paying for it. And she never said it.”

It had been months since Debra died, and the bank contacted Dr. Heather Richardson, MD, on the very same day her friend Debra’s death certificate arrived.

“We were each other’s living will person, and so I went to the bank.” 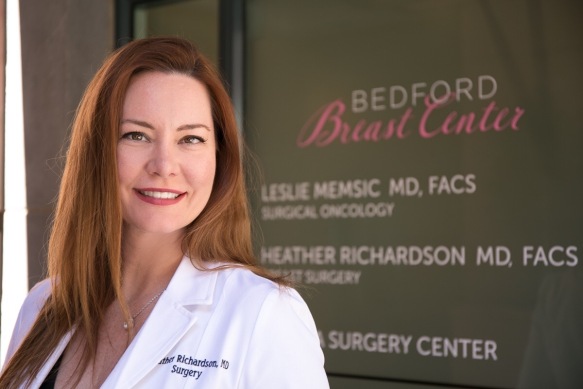 Dr. Richardson is a respected and beloved breast health surgeon at Bedford Breast Center in Beverly Hills, California. One reviewer on Yelp writes that she’s a ‘highly skilled and professional surgeon, who also just happens to be a super cool bad@ss.” Breast cancer patients write about how she saved their lives. Office staff smile about the way Dr. Richardson hums and sings so freely and skillfully.

With a passion for the fine arts and science, Dr. Richardson loves her work.

“I have to think three-dimensionally. I have to think about balance, symmetry, aesthetics. I get to talk to people about their fears and anxieties. And usually I get to make them feel better. And they’re so grateful. To connect with people, to use an analytical mind to solve problems, and then to physically have to do something… the artist in me just loves performing surgery. It’s just really elegant. They talk about the ‘flow state’ when you’re doing something and you kind of get lost. I absolutely get in the flow state when I’m performing surgery.”

About five years prior to that day at the bank, Dr. Richardson had been communicating with her friend Debra who was going through a hard time. Dr. Richardson invited Debra to come to Los Angeles to stay in her spare bedroom.

“She never wanted to be a burden, but there was this heaviness to our conversations. I don’t remember the exact day, I told her point-blank: ‘There’s never going to be a right time. Things are never going to be organized and orderly or tidy enough. At some point, you just have to get on a f*king plane.’ We used that moment, that statement, many times after that to punctuate those action thoughts that need to propel us into the next stage of our lives, as paralyzing as it may be to take action.”

They decided Debra would stay for a month or two, rent-free. She could get her feet on the ground, then go. She wouldn’t have to work or pay for anything. Just take care of home life and enjoy. Two months grew into nearly five years, and a sisterhood.

“She was a very bright girl. She didn’t have an opportunity to really get educated. She is just one of the most giving, caring, conscientious people ever.

“I have to have an education because I had to have an education. I can’t do what I’m doing without having gone through the schooling that I’ve gone through. But at the same time, I don’t necessarily think that people that are formally educated are better or smarter than other people. I know a lot of people who have learned what they know just from experiences in life lessons, and they’re so much more capable and smart than a lot of people who are more classically educated.

“One of Debra’s favorite mantras was ‘unexpressed expectations are premeditated resentments.’

“So, if you don’t tell someone what you’re thinking and you don’t communicate anything, then you don’t give anybody an opportunity to try to make it better or fix it.”

They did communicate, effortlessly. And they didn’t have unexpressed expectations.

“We just had this team living approach where I paid for everything and she took care of stuff. So she cooked and cleaned and took care of animals. She had two cats, and I had two dogs. We had like a little menagerie. We were like cousins or sisters.  I would do my thing and work, and she would do her thing and take care of the dogs and the house and listen to podcasts and research everything.

“We didn’t ask for anything from each other, but anything that we needed, we would have given to each other.”

“She came into my room at four-thirty in the morning and said, ‘something’s really wrong. I have a horrible headache.’ And after talking with her, I figured pretty immediately that something was not right. So we went to the hospital.”

Soon after arriving at the emergency room, Debra seized. “That was her last conscious moment.” Debra died of a brain aneurysm.

Even in death, Debra was as Dr. Richardson described her: giving, caring, conscientious. She donated her organs. Months later, a memorial service was held. The date was February 11, 2020. Debra’s birthday. She would have been 48 years old.

Debra came to Los Angeles to heal. And so did Dr. Richardson.

Back in 1999, Dr. Richardson had finished medical school and was in her surgery residency at Emory University in Atlanta, Georgia, when her mom was diagnosed with breast cancer for the second time. She died in the year 2000. The young physician didn’t yet know what type of surgeon she wanted to be, but soon after, that decision was made. She joined a practice with Atlanta breast surgeon and mentor Dr. Bill Barber.

“I lost my own mom, and I’m sad without her. I wish she was still here. I think the gift in that experience of going through that with her is that I saw what people are going through mentally on their own side of it, the fear that they have, the anxiety they have, how they process information. Learning those lessons through someone who actually went through it, it really kind of gives me a scope of what my patients might be going through. And as much as I would rather be a slightly crappier doctor and still have my mom around, it’s definitely something that I’m making the most of, and I know that she would be proud of me.”

Dr. Richardson’s layers of resilience are as deep and diverse as the intricate paintings she creates.  Her perspective is ever listing toward the light. 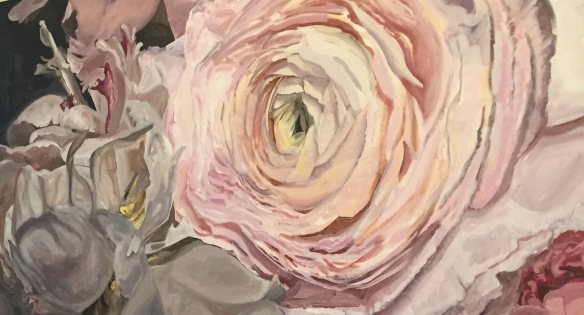 “In any scenario, you have an opportunity to make something better for a person… and sometimes that person is yourself.”

By 2014 and after another loss in her personal life, Dr. Richardson needed a change. A place to heal.  It was her own time to get on a plane.

“I was in a very complicated marriage for years and years and years. And my husband took his own life. It was a really horrible situation, and I wish he had made different decisions. But I can’t unmake his decisions. And they weren’t my decisions to make. So I have to just sort of let them go and appreciate that I wish things had turned out differently. I can’t do anything else about it. And all I can do is take what I have from all of that experience and move forward. That’s why I left my practice in Atlanta and why I came to Los Angeles.

“Just start over, just give myself a new place to come. I wanted to go somewhere really different and wide open where there were tons of opportunities for me personally and socially and career-wise. And I just wanted something bigger.”

What did she do during that transition time? Did she have anchors or routines to help her feel grounded? Did she exercise? Hike? Meditate?

“I’m the worse exerciser. I am the worst dancer. I don’t do anything athletic. I’m just a giant klutz. I don’t like moving!

“The most athletic thing I do is downhill skiing and that’s because the mountain does the work. All you have to do really is stand still and go into a controlled fall. At the other end of that is a giant bowl of melted cheese and several glasses of wine!”

Humor is something her mom and dad instilled in her and her brother, Jamey.

“Our family is really funny. Whatever the situation is, it is what it is. And it doesn’t have to be good or bad. You don’t have to put a sign, a dramatic absolute, to anything. Any situation you have, you can take something good away from it or any situation you can make it better. If it’s already pretty good, you can just enjoy it and be grateful for it.

“I just threw myself into my work, and I love what I do. I came here to start with one practice, and that ended up not working out.

“To have a really busy, thriving practice and start over from scratch twice was really sort of a blow. That is really where all of my attention and all my effort went. And it bore fruit. So that was the reward. The reward was in that work: Planting those seeds and then watching everything grow and develop and blossom. I didn’t really think, well, what if I fail?”

She asked herself a different question: What am I going to do with my success?

“Any ingredients that you’re given, you can always make something from it. Any horrible situation that life presents you, presents you with a lesson of your own strength, your own resilience.”

Through her example, Dr. Richardson shares that strength and resilience with every patient she encounters and with all who come to know her caring heart.

“Every stumbling block that I encountered was a rock or a current that sent me onto this beautiful new shore.” 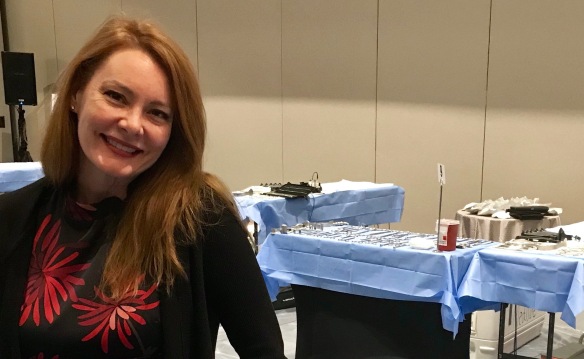 Back at the bank that day, Dr. Richardson was told that whatever was in Debra’s account was now hers.

Dr. Richardson knew that Debra’s father had left her about $100,000 a few years prior.

“I figured after three years, she probably had like $80,000 left. After sitting for two hours at the bank, they handed me a check.” There were $13,000 left in Debra’s account.  “I was really shocked that all of her money was gone. My first thought was, ‘way to go!’ You haven’t been sitting on a big pile of money that you’ve been waiting to spend. You did everything you wanted to do. I’m really, really impressed!’ Then I thought, maybe she’s put money somewhere, and I need to find out where it is. As I’m going through every month of her bank statement, it’s just trickle, trickle, trickle. The entire time she was living with me, she was putting money into my account.

“I had two bank accounts, and I would move money back and forth between the accounts. And when I would do that, it would just say the name of the bank. And her account was at the same bank. So when she transferred money in, it just said the name of the bank. So I never, ever, ever knew. She did it completely anonymously. The only reason I ever found out was because she died.”

Not unlike donating her organs after death, Dr. Richardson knew how befitting this gesture was of Debra’s character.

It takes a selfless heart to recognize and appreciate the depth inside the soul of another person. That’s what they both did for each other. And that is why their sisterhood was complete harmony.

Dr. Richardson says Debra always gave more than she got.

I bet a lifetime of family, friends and patients would say the same thing about Dr. Heather Richardson. 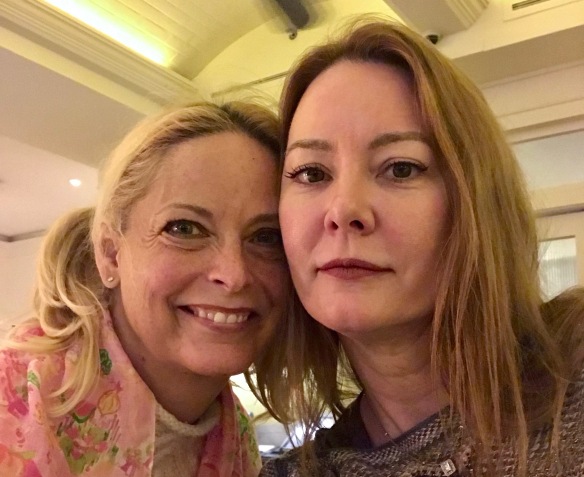