“I’m an entrepreneur. In a way, it doesn’t matter what I’m doing. It’s a certain kind of creativity and determination and just a not-giving-up. It’s creating something out of nothing.”

Edit Keshishyan is 38 years old, and she moved to the US from Armenia when she was just ten. She is passionate about her work and life and has let her passion and intuition guide her every step. As a child, she watched her parents closely — they were models of the self-made, the creative. 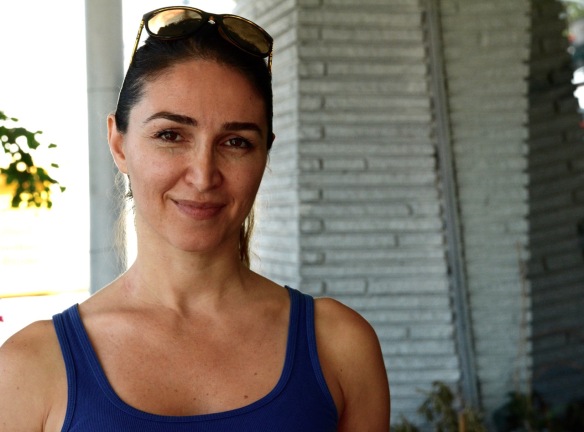 “When I was little in Armenia, my mom was a dress maker and my dad was a cobbler, a shoe maker.  I would help him in his little workroom. Cut leather. The smell of leather is very sentimental for me now,” she says, remembering her late father. “My mom…I would watch her make dresses, and I kind of tried to make little dresses for my dolls.”

Like many childhood recollections, those early memories made an impact on young Edit and would become ingrained in her character. Design and fashion would be Edit’s calling, and hard work, self-reliance and optimism would be her method.

As a college student in southern California, Edit was studying sciences with a dream of becoming a pediatrician. Despite her commitment, other dreams were visiting Edit at night. They not only woke her from her sleep, they were also a wakeup call.

“When I was in college studying biology, I would have these very vivid colorful dreams. I would wake up in the middle of the night and sketch it really fast and then go back to sleep.” She was sketching her dreams of dress designs and fashion.

Edit paid attention to the messages of her subconscious and a new life path opened like a runway. Fashion was her new Medicine.

“Right when I changed my major, there was no question. That’s what I wanted to do! I immersed myself completely.  I looked at all the magazines, read a lot of books, I tried to become just as good as I could become at making patterns, making dresses, draping. I would sew until midnight. I loved it.”

Edit’s tireless commitment to learning and growing took her from the place of imagination to manufacturing warehouses in downtown Los Angeles to high end boutiques in LA, New York and Paris and finally to fashion’s esteemed runway shows. She was in it. She was doing it.

During that time, Edit met the man who would become her husband, Alberto. He lived in Santa Fe, New Mexico, and had been heavily influenced by time he spent living in Brazil. When he came back to the US, his love for the martial art Brazilian jiujitsu became a way of life and he opened jiujitsu gyms. One feature of many jiujitsu tournaments, Edit told me, was a Brazilian “superfood” called acai.

At that time, Edit was an avid student of health, reading about superfoods before most of us had heard the term.  And sometimes it’s the most curious of life details and circumstances that influence our life’s path. Love leads to connections that lead to new life directions.

Edit and Alberto married and started a family in southern California.

“I really wanted to focus on the family and not be on this stressful planet of the fashion world. I decided to give fashion a break.”

“For the past 10 years I’ve been helping Alberto with the gym. It’s been our project aside from having three kids.

“We both really love acai. And I’ve been making acai bowls even since Santa Fe. We decided to have acai at the gym as a little fruit cart.  I put bamboo around it and had a freezer with acai in it. I had it running like a little business of its own, and I took it very seriously.”

They rolled the cart into the street and people would drive 30 minutes just for a cup of acai. When the space next door to the jiujitsu gym opened, it was originally going to be a gym expansion. Instead it turned into the ACAI JUNGLE CAFE in Burbank, CA. And Edit has been running this health food spot that plays world music and serves up well-being ever since.

“I was very nervous about opening the cafe. Honestly even today a year later, every person that comes… I am genuinely happy to see them. I don’t ever want to take it for granted.

“I came across an article about emotional intelligence recently. It talked about all the different ways you self-talk and what you want to feel like every day, how to handle stressful situations, how to stay calm. And I thought I really have to bring this to the meeting we are going to have with the cafe group.

“When I was little, my mom always used to say that people like to be around happy people. I think I’m a happy person overall. Unless something really happens that’s bad, nothing kind of throws me off.

“I try to inspire them to constantly push their own limits. It might build some confidence. I want them, if they do leave here, to say ‘I got something from that.’

“I think another fulfilling part about having this business is the way it affects my kids, my daughters especially.  They don’t see anything holding me back. They don’t see me saying, ‘Oh, I can’t.’

4 thoughts on “Design Your Life”

What did this post make you think about? Did it stir self-reflection? I'd love to hear from you. Add a comment or participate in a discussion. Share this with a friend and give the free gift of story. Cancel reply