My morning eyes were diverted from the tar of I-70 by a flash of vibrant color painted across a building set back from the road.

“That’s where I’m going for lunch!” I declared to no one. 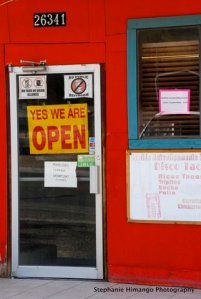 The sun was high in the New Mexico sky by the time I returned. As I stepped inside Disco Taco, it took a second for my eyes to adjust, and no sooner, David Medina was standing in front of me with a smile as warm as the southern sun. A few wisps of gray hair brightened his face even more, just below his temples and brushed through his mustache. The little restaurant with the 1970’s-era name exudes warmth — from the friendly welcome to the Mexican food to all eight tables topped with a yellow check cloth and a flower.

David Medina is the manager of this little spot, and has been since 2011. This job is a blessing in his view, and the offer to come work here arrived at just the right time.

For 31 years, Medina was an engineer in Juarez, Mexico, working at Delphi and making electrical harnesses for automobiles. He had stability. He had status.

Then he was laid off.

That was only part of the cascade of changes to come. At the same time, the small grocery store Medina and his wife had operated for 10 years in the border city was under threat. Juarez was rapidly destabilizing under the stress and violence of Mexican drug cartel activity, and it was not long before intimidating characters showed up at their grocery store. “Bad guys” began demanding money from Medina, and in exchange they would “allow” him to continue to do business. Some people call it protection money. The rest of us call it extortion.

Doors were closing for Medina, and as he and his family faced this new reality, something happened: another door opened, in response to action he’d taken about 14 years prior. Back in the 1990’s, Medina had applied to become a legal U.S. resident. And then at this critical juncture in his life, the paperwork finally came through.

His new life in the U.S. didn’t take off instantly.  He and his wife struggled to find work and a place to live in El Paso, and even though the city was just across the border from Juarez, the new place and the new process felt foreign. Eventually Medina received the offer to come to the little town of Ruidoso Downs, where he had been a customer at Disco Taco on previous visits.

He is 55 years old now and is rebuilding his personal and professional life “from zero.”

“I don’t have any experience with this kind of business. I have experience buying and selling groceries.”

He pauses. “It’s really hard to start again.” While he’s happy that he and his wife have found a new opportunity in the U.S., until his grown children can join them from Mexico, he won’t feel whole.

But his optimism doesn’t fade. He said he feels he is being protected and implies that good things happen to him.

What did this post make you think about? Did it stir self-reflection? I'd love to hear from you. Add a comment or participate in a discussion. Share this with a friend and give the free gift of story. Cancel reply